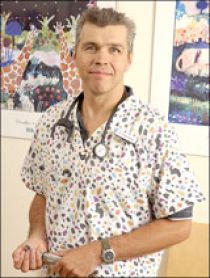 Josh graduated from the University of Edinburgh in 1990. He also has an intercalated honours degree in pathology. He grew up in a house full of dogs, cats and horses, his step mother bred Maine Coons and his grandparents bred Poodles and Bull Terriers (though never together!)

Upon graduation Josh went into mixed practice in the wilds of Yorkshire and was granted a 4 month sabbatical which he spent in Mauritius working with an SPCA team neutering the local pets from a mobile surgical unit. He returned to practice in Yorkshire for a further 2 years but his interest in travel had been sparked and he left to work in Greece, Hong Kong, Australia and the Bahamas.

Josh worked in a small animal practice in the Bahamas for 2 years. One of the highlights of this time was being involved in the veterinary care for the dolphins at The Dolphin Experience Freeport, Grand Bahama.

However Australia called and in 1998 Josh made his third and final visit, moving to the Mornington Peninsula, originally to cover a one year sabbatical leave for one of the partners at Peninsula Vet Hospital in Mt Eliza. Josh then spent 4 years at Frankston Heights Vet Centre and in 2000 he gained membership to the ACVS (Australian College of Veterinary Scientists) by examination in Veterinary Radiology.

In 2004 Josh and Camilla purchased Mt Martha Veterinary Clinic, realising a long held ambition to own and run their own practice.

Outside the clinic Josh loves to spend time with his four girls. When he needs to seek refuge from the perfect storm of females, he enjoys working out at the gym and running. Josh also loves to read historical novels. He is a self confessed news junkie and ‘tragic’ for anything written about Ancient Rome! 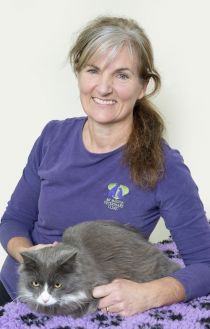 Camilla graduated with honours in Veterinary Science from Melbourne University in 1987. She started work in a busy mixed practice in Bacchus Marsh for 2 years before leaving for the UK on a working holiday.

The working holiday that was planned for a year lasted seven! Camilla worked for two years in a very busy small animal clinic in East London then she gradually moved north doing a string of locums to vary her experience. Eventually she settled for three years in Newcastle upon Tyne where she ran a branch practice that was part of a four clinic mixed practice. Her fondest memory of this time was driving over the moors in the snow in the depths of winter to deliver a triplet of lambs – her James Herriot era.

Eventually it was time to come home and Camilla shipped herself and her dog home. Moose the Yorkshire rescue dog has long ago passed on, but was epileptic, had a false hip and needed four separate gut surgeries – she chose the right owner!

Camilla then worked at the Animal Emergency Centre in Mt Waverley and gained her Membership of the ACVS by examination in Emergency Medicine and Intensive Care in 1999. She stayed at the AEC until 2005 and maintained her love of emergency medicine with part time work at the Hallam AEC, until the arrival of Camilla and Josh’s third child at the end of 2006.

Camilla thoroughly enjoys the relationships that are forged in a small practice with pets and their owners. After years of emergency work she loves to see healthy animals and keep them that way, and has a soft spot for the geriatric patient. She is still interested in intensive care and many a patient has spent the night in the lounge room on a drip with a fluid pump. 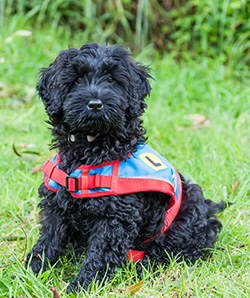 Camilla and Josh live in Mt Eliza with their three daughters. They share their home with a variety of animals, currently a beautiful ginger tom (who rejoices in the name of ‘Lord Corville Munro the Invisible Space Cat’), four chickens and two rabbits.

Camilla and Josh are also foster carers of an Assistance Puppy ‘Minty’. Needless to say their entire family and clinic staff have fallen for her bigtime. Camilla and Josh are grateful to Assistance Dogs Australia for entrusting the care of this beautiful dog to us and look forward to helping her get ready for her very special role in life. Minty is now a fully-fledged assistance dog and lives in NSW. 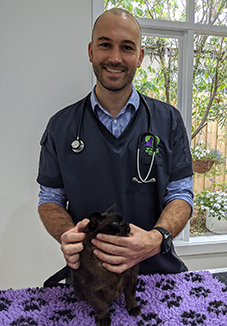 Peter graduated from Melbourne University in Veterinary Science in 2010 since then he’s worked in general small animal and rural mixed practice in Victoria and the UK. Since 2016 he has done occasional locums for us. Now with our new pet hospital he’s become a regular. Peter has a particular interest in Veterinary Dentistry…so great in fact that he decided to go back to school and in 2019 he graduated from La Trobe University as a fully fledged human dentist! In the long term Peter aims to combine the two disciplines and specialize in Veterinary Dentistry. In the meantime he enjoys being part of our team and getting to know the pets of Mt Martha. We’re very grateful to have Peter on board with his winning smile experience and unique skillset.

Peter grew up on the Mornington Peninsula and in his spare time enjoys surfing swimming and mountain biking.

John graduated from Cambridge University in 1988. After two years in dairy practice in the wilds of Cornwall and a year in a very busy small animal practice in Sunderland, he fell in love with an Australian and moved to Melbourne. He worked for 12 years at Karingal Veterinary Hospital before moving to Sydney University to teach surgery to final year veterinary students. Arriving back in Melbourne, he continued to work in education at Melbourne University, Box Hill TAFE and La Trobe University teaching anaesthesia and surgery to vet students, vet nurses, animal technicians and researchers.

John is a great believer in further education and has amassed an impressive list of postgraduate qualifications, including Membership of the Australian and New Zealand College of Veterinary Scientists in Small Animal Medicine, Small Animal Surgery and Medicine and Management of Laboratory Animals. Out of work and study, he wrangles two teenagers, takes analogue photos and travels round Australia and the world seeking out further adventures. 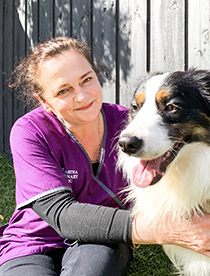 Having always had animals as a child I was interested in veterinary nursing. After high school work experience I was hooked and continued this path for the next 20 years ! During this time I acquired a Certificate 4 and a Diploma in Veterinary Nursing and years of clinical experience working in the UK and locally on the Peninsula including a few years in the early 2000’s working alongside Dr Josh in Frankston.  After having my children I decided on a career change working in business administration and customer service. Now my kids are older I’ve returned to the profession I truly love and was thrilled to get the opportunity to work again with Josh and Camilla. I’m enjoying being part of this fantastic team and am looking forward to my putting my experience to good use. Currently my menagerie consists of 2 dogs a cat a budgie and 7 chooks. Never a dull moment! 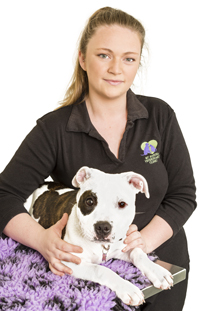 I started as a trainee Veterinary Nurse at Mt Martha in December 2013. My first contact with the Veterinary industry was during year 10 work experience, I then continued working as a kennel hand whilst in high school. After three years of study I acquired my Certificate 4 in Veterinary Nursing in April 2017. 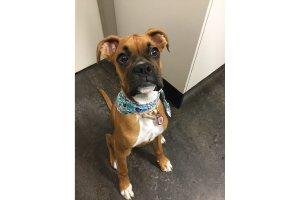 Tilly displays her ‘Sit & Stay’ skills, with our program your puppy will do this too!

I have been a local on the Mornington Peninsula since moving here from England when I was 7 years old. I have Ned a Staffordshire Bull Terrier and Tilly the Boxer . I took both of them through our puppy school so when the opportunity arose I was more than ready to run our Puppy School in 2018-2019. I also enjoy travelling in my spare time and baking, you may even see me helping out at local markets with my sisters cake business.

In December 2019 I gave birth to a healthy baby boy, Miller and am looking forward to returning to the team in mid 2020. 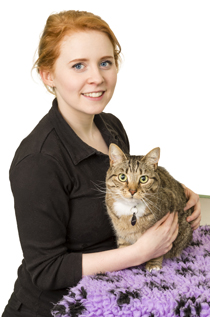 I have wanted to be a veterinary nurse for as long as I can remember, and since 2012 I have studied a range of animal care qualifications before starting my Certificate IV in Veterinary Nursing in June 2016 and beginning work with Mt Martha Veterinary Clinic. I am passionate about animal welfare, and currently volunteer for Animals Australia, with the dream of opening an animal sanctuary as a qualified veterinary nurse. In January 2019 I qualified as a certificate IV veterinary nurse and I’m really excited about to be caring for your pets in our fabulous new vet hospital!

Since late 2019 I have been running the Puppy School and really enjoyed getting to know so many lovely locals and their wonderful puppies. This has sparked a particular interest in behaviour & training. I aim to pursue further studies in this area in the near future so watch this space! 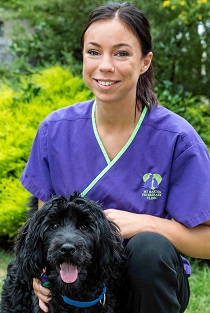 Since as long as I can remember I have been passionate about working with animals, beginning with nursing (with the help of my parents and a lovely veterinarian of course) my three legged bunny when I was five years old. Since then I have always had animals in my life. Currently my menagerie consists of two horses, and a cat who is fairly convinced she is a dog! Until an injury recently intervened I was an enthusiastic ballroom dancer. 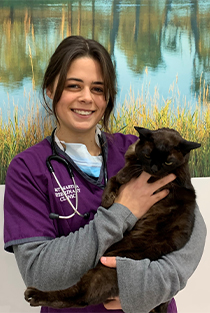 My mother was a Penguin keeper at London Zoo so its hardly surprising I grew up surrounded by animals and caring for them was quite simply a non-negotiable part of my upbringing!

As a teenager my passion for equestrian sports was curtailed by injury so I looked to the Veterinary profession which had always been of interest.

My Vet Nursing career began in 2018 at a large practice in the Northern Suburbs, where I worked as veterinarian’s assistant and overnight nurse in the emergency ward whilst I studied Veterinary Bioscience at La Trobe University. At that my first practice I got the opportunity to learn a lot as I was exposed to a large and varied caseload.

In 2019 I relocated to the Mornington Peninsula to be with my partner Trent and my family, whilst also looking for a sea change. I was fortunate to find employment with Josh and Camilla and haven’t looked back! I particularly enjoy the supportive environment  that  their practice offers and see our team as a little family.

Trent and I have a dog called Betsy and 4 chooks who think of themselves as dogs. I spend my weekends exploring Victoria in our 4WD with my surfboard and longboard. 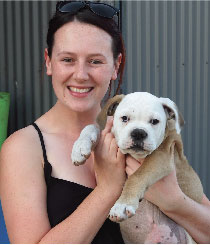 Here I am, right back to where it started! My vet nursing career began at Mount Martha Veterinary Clinic in 2007 as a trainee veterinary nurse. I was part of the team here for 4 years until I went to Germany and Austria in 2011, where I spent 1.5years before coming back to continue my veterinary nursing at another practice. When asked if I’m a cat or a dog person I have to answer BOTH. I simply can’t choose as they are each so wonderful in different ways.

10 years on from when I first started here, I’m looking forward to seeing some familiar faces, meeting new ones and working with the team here to support you with all your pets preventative and therapeutic health care needs.

I live on the Peninsula with my partner Beorn and our two little boys. 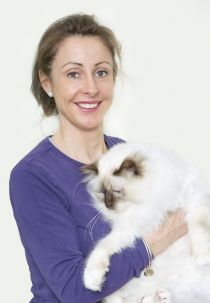 Sam was a key team member from 2004 until 2020 playing an important role in mentoring incoming staff . When in mid 2020 an opportunity arose in her partners jewellery business she felt it was right for pastures new. Josh Camilla and all her colleague wish her well in her new venture. We remain profoundly grateful for her 16 years of loyal service and the selfless contribution she made during that time.
Book Now Online Booking